Using the three currents of power is most useful during Lunar work - spells, occult rituals, times when you want the magic to do what you tell it to. Solar rites tend to be a bit more about participating and building awareness and gratitude for the world, immersing yourself in its splendour - rather than making use of it for your own purposes.

When you want to contain your working within a "circle", we make a triangle like so:

For more heavy-duty workings you can overlay triangles twice or even three times - or more. Generally we place the altar on the pathway between the Lunar and Solar columns. We can place the altar at one of the columns to emphasise a current. Earth/Gaian power is implied at the center of the triangle. In this triangle, we think of each point as a column. I currently mark columns with a coloured candle, with a tarot card (Moon/Sun/Star), or with their alchemical symbol. What colours ought we use? I was using black and white for Lunar and Solar, but am now unsure of this. I think either:

When we think about the Pendan star, and the five qualities of the mage - we see that mastery over the three currents is represented. Solar at Daeg ("Day" - ᛞ) and Lunar at Nid (ᚾ) correspond to the two feet, and the way we walk between worlds. Stellar power is at the top at Peordh (ᛈ), and this attribution is in great part because the meaning of Peordh is a mystery, a long-lost letter. 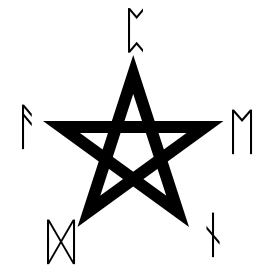 On the Alchemical Tree

We represent the pathways to power a mage can tap into with the diagram of a tree, based on the Qabalistic Tree of Life. The Tree of Life is so elegant to use and a part of the occult I've always really loved; our adaptation strips out the Abrahamic imagery as standard, but is close enough that you can put it back in.

On the tree, the Solar current is the middle pillar - and the ultimate source of power is associated with Luciferian/Enlightenment/Gnosis, as well as with the Alchemist's ultimate goal of making a tincture of gold. Stellar and Lunar power form the Left and Right pillars. But this part of the system is very much a work in progress.